The National Eye Institute projects by the year 2050, 5.4 million people in the United States will suffer from Age-Related Macular Degeneration (AMD), more than double the number in 2010. 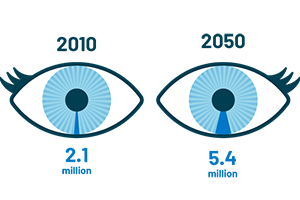 Each eye represents a total of 80 million people, the estimated number of Americans who will be 65 and older in 2050, the population most affected by eye disease.

AMD is a common eye disease affecting people over the age of 60. It damages the macula, a small spot near the center of the retina that focuses images and translates them to the brain. In some people, AMD advances so slowly that vision loss does not occur for a long time. In others, the disease progresses faster. When the macula is damaged, the center of your field of view may appear blurry, distorted, or dark. AMD by itself does not lead to complete blindness, with no ability to see. However, the loss of central vision in AMD can interfere with simple everyday activities, such as the ability to see faces, drive, read, write, or do close work, such as cooking or fixing things around the house.

Who is at risk?

Age is a major risk factor for AMD. The disease is most likely to occur after age 60, but it can occur earlier. Other risk factors for AMD include:

Researchers have found links between AMD and some lifestyle choices, such as smoking. You might be able to reduce your risk of AMD or slow its progression by making these healthy choices:

The early and intermediate stages of AMD usually start without symptoms. Only a comprehensive dilated eye exam can detect AMD.

What are the stages of AMD?

People with early AMD typically do not have vision loss.

Intermediate AMD may cause some vision loss, but most people will not experience any symptoms.

There are two types of late AMD:

AMD has few symptoms in the early stages, so it is important to have your eyes examined regularly. If you are at risk for AMD because of age, family history, lifestyle, or some combination of these factors, you should not wait to experience changes in vision before getting checked for AMD.